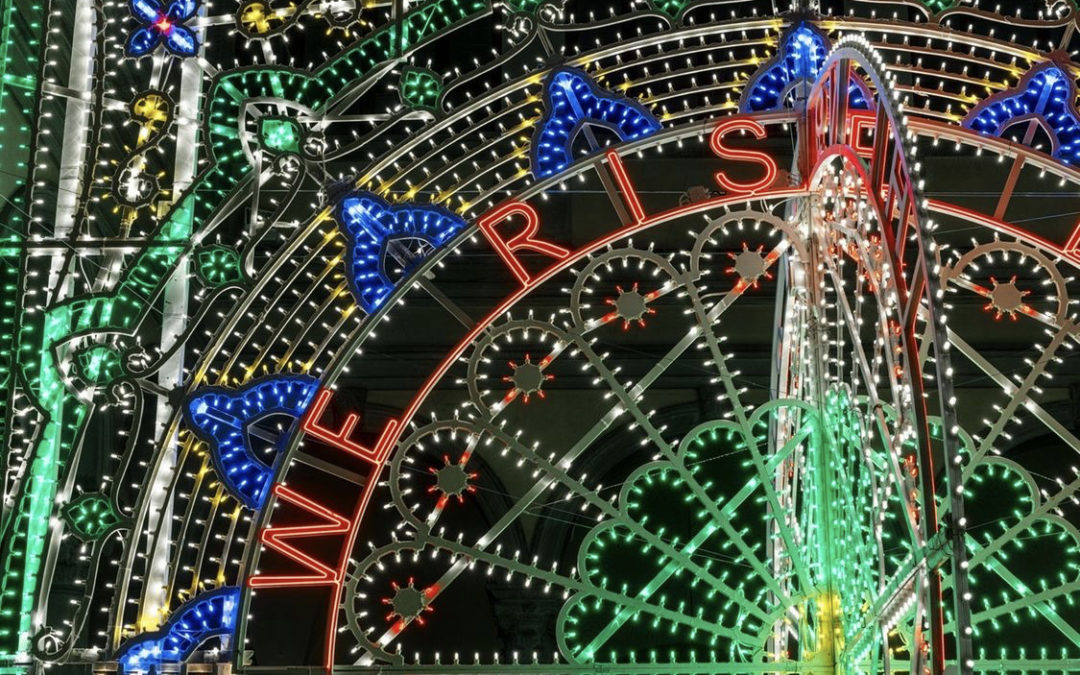 SpeakART: Multidisciplinarity characterizes your formation as much as the forms of your artistic practice: what is the link between these two aspects?
Marinella Senatore: I studied classic music, direction of cinematographic photography and contemporary art, therefore I am a multidisciplinary artist by nature and the disciplines in which I am interested are more and more numerous; for me the languages are possibilities of involvement and experience and I have the same curiosity of any other participant to my projects when I get closed to them. The infinite potential of combination excites me.

SpeakART: Do you think there are forms of expression or there have been works, with which you can express yourself at best?
Marinella Senatore: Participation, both as a structural methodology and as a focus of my research, is at the heart of my practice. When I was younger, I thought it was only a way of creating, instead it was much more, it was also the field of investigation. Both when I work with people belonging to the same community making collective urban actions (in The School of Narrative Dance), and when I take photos or I make a collage or any other type of artwork, my approach is still attributable to what is at the base of the environment: affect the perception that each individual has of himself and of the reality, activating it through the creation of an energetic “environment”. 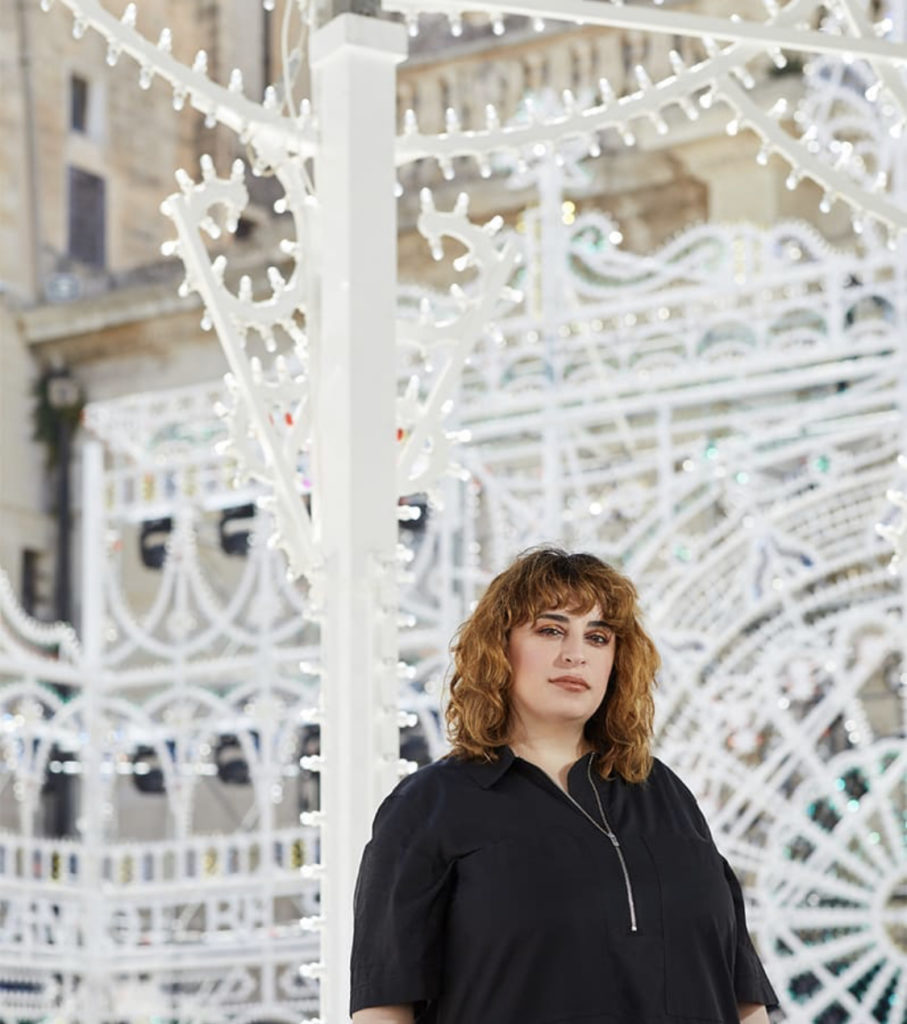 SpeakART: How would you define your conception of art?
Marinella Senatore: I have a great respect work, and contemporary art is mine: not by chance the working structures are also among the constellations of my research, and the possibility to emancipate and evolve within such codified aggregation structures, then in the end it has become a system on which I worked with a strong interest towards the flowering potential of the single. Another word that I really like to associate with art is “utility” and I don’t understand how this can be detrimental in terms of value.

SpeakART: You respond to an ideal of an artist as activator of processes and community builder: can you explain the importance of the concept of relationship for you?
Marinella Senatore: For me it is really important to do and to work on the participation in the way I have always wanted and this intuition has not changed in the years; I have learnt and I learn, probably improving also the realization of all the parts of the project, in particular the final restitution, but in truth the idea of giving something of oneself to those who are willing to do the same, which has always been my challenge, I think is extremely complicated, the most difficult but in my view unavoidable. I believe that my practice has a lot to do with “energy”, an energy that flows from the short circuit between different elements put into dialogue in the same space, real or virtual. Assuming the role of activator of a mechanism (the artwork), one of the purposes is to produce a transforming force from the meeting of the elements included in it; a force that then spreads into the surrounding reality until it reaches the viewer. 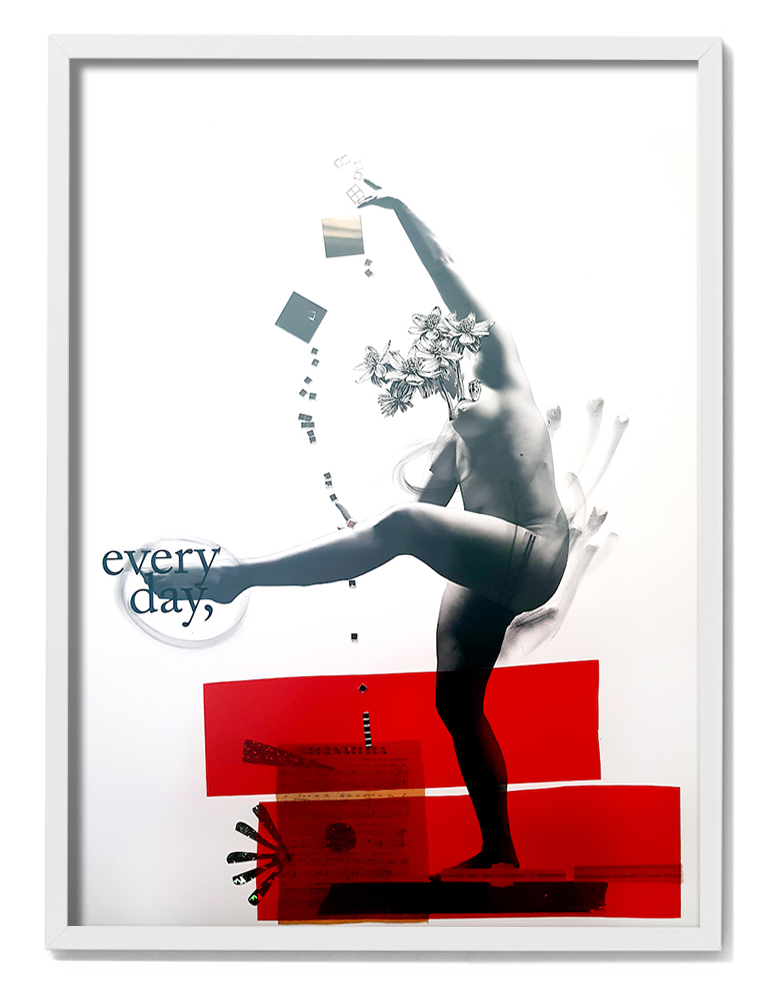 Can one lead a good life in a bad life?
Courtesy: marinella-senatore.com

SpeakART: How would you describe your role as an artist within the society? Can it be compared to a kind of social activism?
Marinella Senatore: To think about the work of an artist without a social role is for me impossible and I understand that this may not be shared and above all it could be interpreted in a very different way, but for me it is substantial.  Whatever we put into circulation in the world has premises and consequences and I want to deal with them.  But I extend this responsibility to every job and every social agent: this is in fact the primary reason why, even if I don’t have time, I try to teach anyway, at least for a few months every year.  I have just joined the teaching staff of the fantastic TAAS (The Alternative Art School), founded by Nato Thompson, at the moment I am the only Italian, indeed the only European, I take this type of assignment very seriously, it is a political responsibility for me to teach.

SpeakART: And in this vision, how do you relate to female empowerment instances?
Marinella Senatore: I strongly fight all social asymmetries, and in the contents of many experiences I am in constant contact with social justice issues: therefore all this is a necessity as well as a duty. As a woman and also as a citizen of the south, I experienced difficulties in entering different areas of work and we never talk enough about it; likewise I was lucky enough to meet many people of great reference in the working world, from workmen to teachers, discovering situations of aggregation born within factories for example, or contexts where emancipation was obtained using the languages that are now very dear to me like music, poetry, activism: these have been crucial experiences for me. While borrowing some elements from activism, feminism, political engagement, I do not feel to limit my practice. 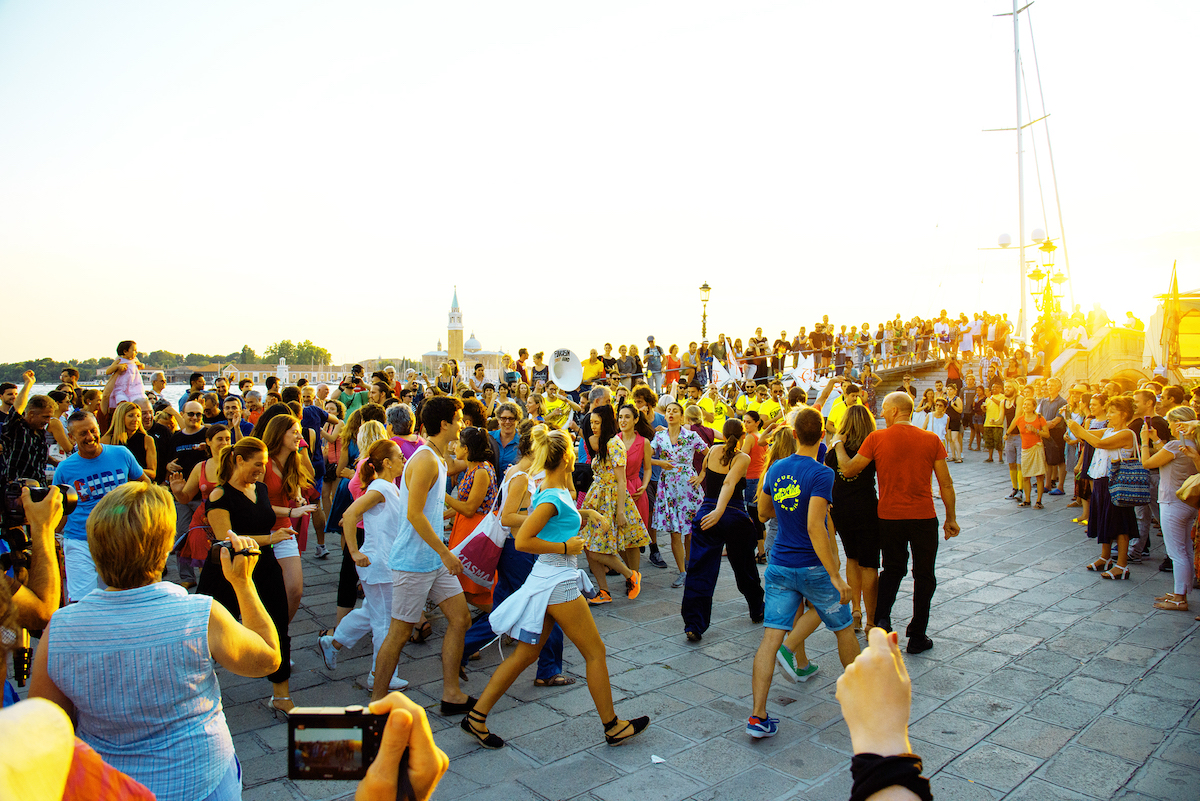 SpeakART: What role do the participants of your works play, both as actors and as spectators?
Marinella Senatore: In 2012 I founded The School of Narrative Dance, following Rosas, the largest participatory project ever made, with over 20,000 participants from 3 countries: Spain, Great Britain and Germany. I understood that a “container” was needed, a sort of umbrella under which to define a belonging; the consequences of the projects, although not controlled in any way by me, also had to do with an important level of affection but also responded to very urgent requests for people – and perhaps also for me – such as that of belonging. Teaching has always intrigued me, especially the questioning of many vertical systems within it, not adhering to social changes and or the potential of empowerment, to a flowering of individuals, to the subversive capacity of a vulnerable person to be re-read and relived in a completely different way – first of all by itself – and then also by others. But sometimes you have to “escape” to make things happen and the vigilance on your role, which at any time can become abusive, is a very serious thing for me.

SpeakART: And what about the environment or the context in which these are or are realized?
Marinella Senatore: I am interested in the stratifications of different narratives, and certainly not to be abusive first of all in the relationship, but in the approach to space.
We often talk about “environment” when describing my work and I like this consideration.
However, that “environment” for me is not to be understood only as a real physical place (the street, or the hall of a museum or gallery), but also as a virtual place circumscribed by the photographic or cinematographic frame, or by the margins of a simple sheet of paper.
In these “environments”, I put each individual in relationship with unexpected and often heterogeneous elements, but always universally recognizable, so as to facilitate their participation in the energy generated by them.
My works are therefore site-specific and fluid: site-specific because they are conceived taking into account the specific “environment” in which they develop; fluid because they are based on a potentially infinite inclusion of the elements involved. 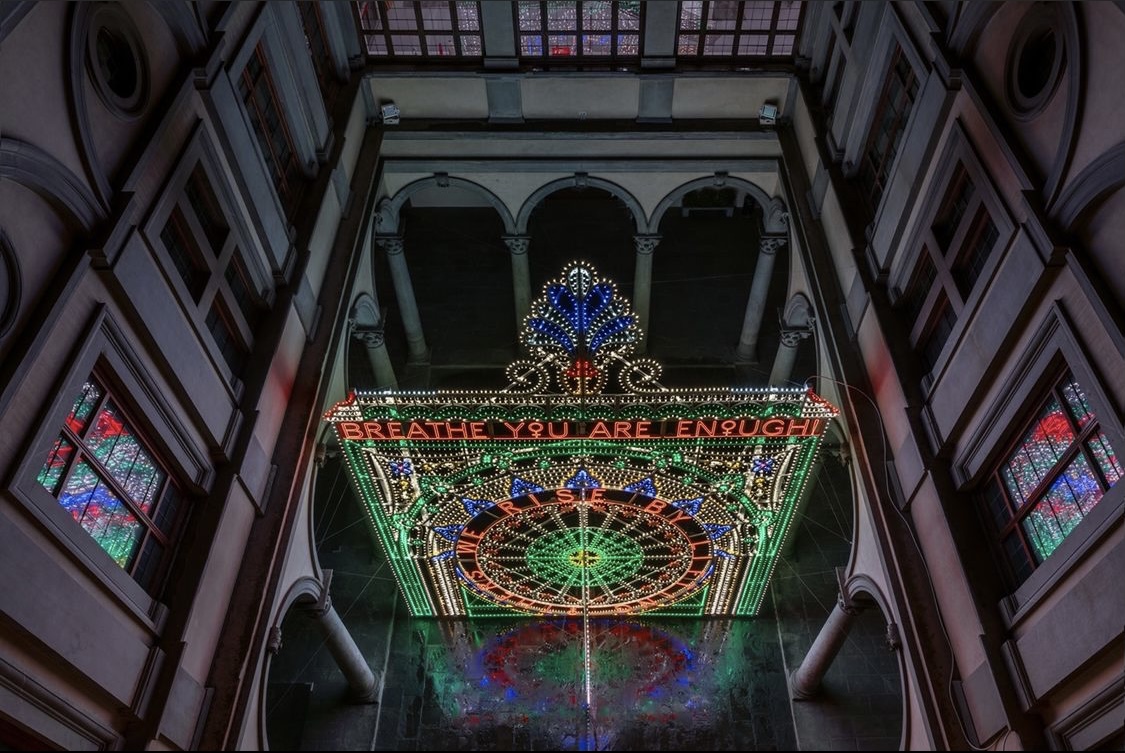 SpeakART: “We Rise by Lifting Others” is the installation that until February 7 was hosted by Palazzo Strozzi in Florence, closely linked to the era we are living in: how did it come about? What did you want to convey, at a time when you are unable to freely enjoy art?
Marinella Senatore: I have been working with illuminations since 2014: they are elements part of that popular culture that has so much importance in my practice and the collaboration with artisans, composers, choreographers, workers, activists is the basis of many aesthetic choices. I mention only a few aspects of the lights, in particular rose windows and portals that become mantra-like wheels, therefore elements catalysts of energy and are always thought of as monuments to the present, to people, to the here and now. In the work at Palazzo Strozzi I was interested in creating an installation that was a social and temporary architecture (which is the aspect that interests me most of contemporary architecture in general), not a monument to a historical power figure, (in this sense I hate the concept of monument), but to an idea of ​​community, celebratory yes, but of a very different idea. The texts that I include start from other people who in turn activate people: I take them from my archives, they can be words that I see on the t-shirts of demonstrators in the street or shared in the participatory experiences that I do. They are not even mottos that want to teach something to someone, they are simply words of people given to other people.

SpeakART: Thanks to social networks, the images of your work have gone around the world, virtually uniting people: do you think they have an influence or a connection with your work in some way?
Marinella Senatore: It probably has some relevance; I certainly use them to communicate with thousands of participants to the projects: for me ‘leaving’ a community is just as important as entering it and you need to take great care.