“What we do is just a drop in the ocean, but if we didn’t do it the ocean would have one drop less”
#PhilosophicalWednesday #22

“What we do is just a drop in the ocean, but if we didn’t do it the ocean would have one drop less”
#PhilosophicalWednesday #22

Gustave Courbet draws profound inspiration from his experiences on the Normandy coasts: in his numerous stays between Le Havre and Étretat, the paintings united by the wave motif originate, precursors of the “Impressionist series” 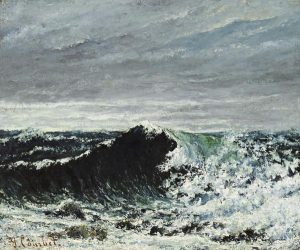 Courbet’s marinas are not peaceful portraits of a maritime landscape, but rather memories of the power of the waves and the stormy ocean, which incessantly comes alive and moves.

In his small canvases he still manages to perfectly express the immensity of the expanse of stormy water and the sky that crowns it, with vigorous brushstrokes to represent the tireless force of nature.

Each brushstroke makes each of the waves depicted indispensable, without which the work would not have the same effect: it has the same meaning and the same usefulness as every drop that makes up that ocean.

Strength is not in the individual but in the whole, and this power becomes in Courbet a metaphor for the struggle that involves life itself not so much in the negative sense of destruction, but in the positive sense of an ever new creation and renewal