December crowns the 2020 of auction houses 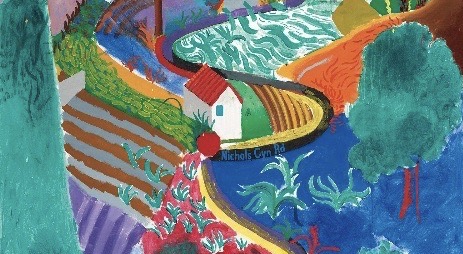 December crowns the 2020 of auction houses

That David Hockney is almost the most expensive living artist in the world, we know since the end of 2018 when his “Portrait of an Artist (Pool with Two Figures)” was sold for 90.3 million dollars at Christie’s, exceeding the 58 million of 2013 for “Balloon Dog (Orange)” by Jeff Koons (then surpassed again by Jeff Koons, with 91.1 million dollars of “Rabbit”).

But Hockney isn’t tired of aiming for big numbers: Philips’ latest 20th Century and Contemporary Art set the record for one of his landscapes and “Nichols Canyon” was sold for about 41 million dollars.

But the evening of December 7 was positive not only for the artist’s records, but also for Philips’ ones, as they have achieved the highest income in an auction in New York since the beginning of its activity, $134.6 million.

Besides the mentioned Hockney, the top lots of the evening, which together worth more than half the total, are a work by Clyfford Still (which rarely appears on the market, and has surpassed his estimate of $17,000,000 by about a million) and a Basquiat (“Portrait of A-One AKA King”) sold for $11.5 million.

But when Philips called, Christie’s and Sotheby’s had already given an answer the previous week.
The first reproposed the format of the intercontinental relay with 20th Century: Hong Kong to New York (December 2), which makes $ 119.3 million, (headed by Henri de Toulouse-Lautrec’s $9 million), also accompanied by a large number of connected spectators and very high sales percentages.

Sotheby’s reaches $63.3 million with the lots of the Impressionist, Modern and Contemporary Art Evening Sale, including a $18.2 million Alexander Calder and Picasso’s Buste de Femme Assise for $ 11.2 million, followed by Monet, Van Gogh and an unexpected Matthew Wong (who multiplies his estimate by $ 400.00 to hit $ 2.35 million).

Perhaps these numbers and successes would appear less striking in a different context, but we are facing an auction market that continues to be alive and attractive for collectors, who continue to accept the challenge of digital auctions that have always found the right way to work in a long-distance 2020.