“Forever is Now: the dialogue of the Pyramids with the contemporary thanks to Art D’Égypte

“Forever is Now: the dialogue of the Pyramids with the contemporary thanks to Art D’Égypte

It’s 2016. Nadine Abdel Ghaffaris gives life to Art D’Égypte, a consulting company that at the same time wants to combine the promotion of contemporary art with the enhancement of the Egyptian historical and artistic heritage: this mission takes shape thanks to exhibition events at three places that are points of reference for the local culture.

Among the pivotal events organized, “Eternal Light: Something Old, Something New” at the Egyptian Museum in Cairo in 2017, “Nothing Vanishes, Everything Transforms” at Palazzo Manial (Roda Island) in 2018 and “Reimaged Narratives” in 2019 at Al -Muizz, one of the most famous streets of the historical part of Cairo, where 28 Egyptian artists for each occasion exhibited their works. 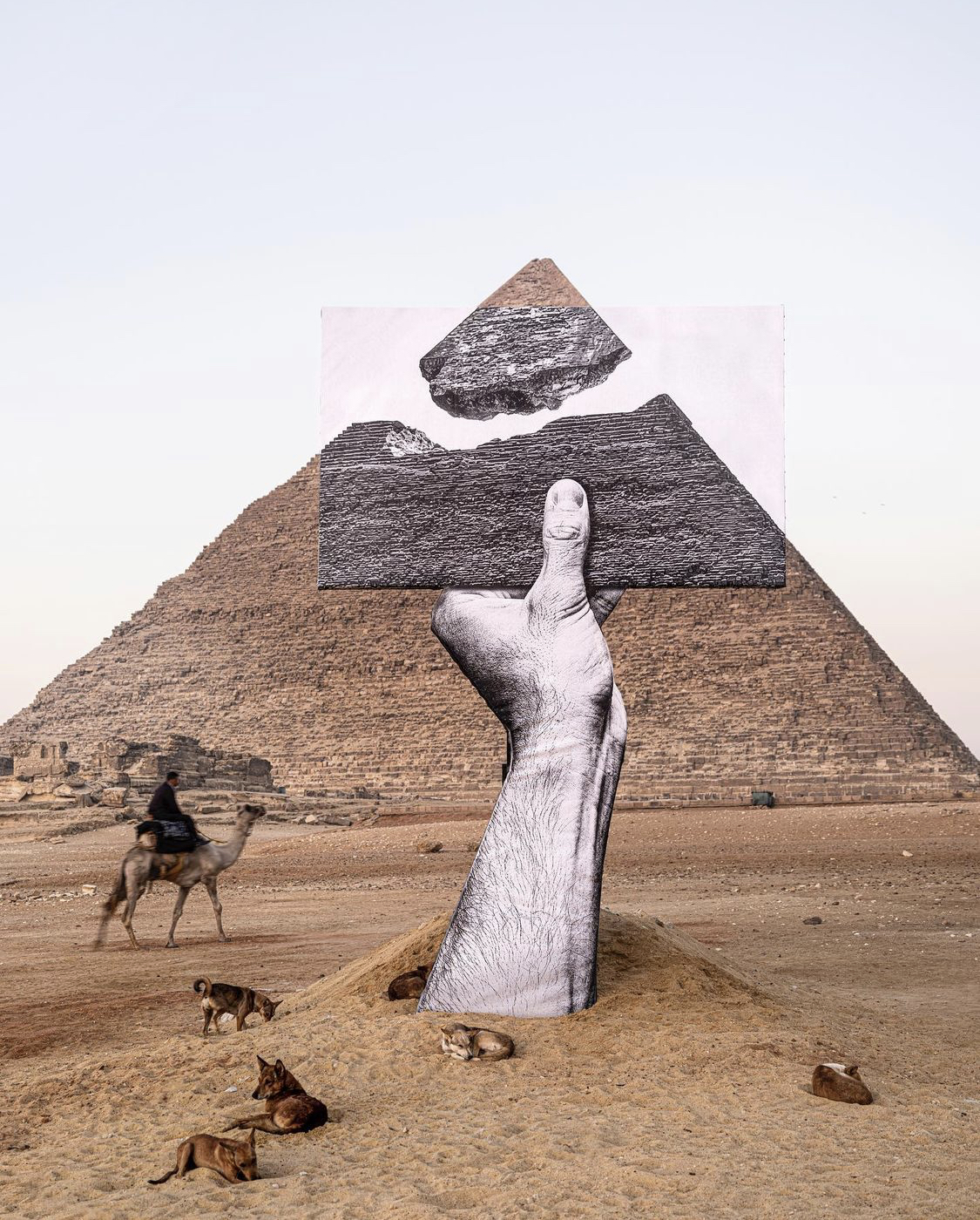 For the fourth annual exhibition, the location chosen is as obvious and banal as possible: the Pyramids of Giza and the surrounding necropolis are for the first time the backdrop to an exhibition itinerary dedicated to contemporary art. There are ten artists chosen for this occasion and they are of international origin, who join forces with the ten individual projects that follow one another in the walk through the pyramids. The old and the new come together perfectly for the first time, starting with the work of the American artist Gisela Colón: Eternity Now embodies past, present and future in a timeless instant with a profound homage to Egyptian culture, with the golden color and the shape reminiscent of the Eye of Horus. 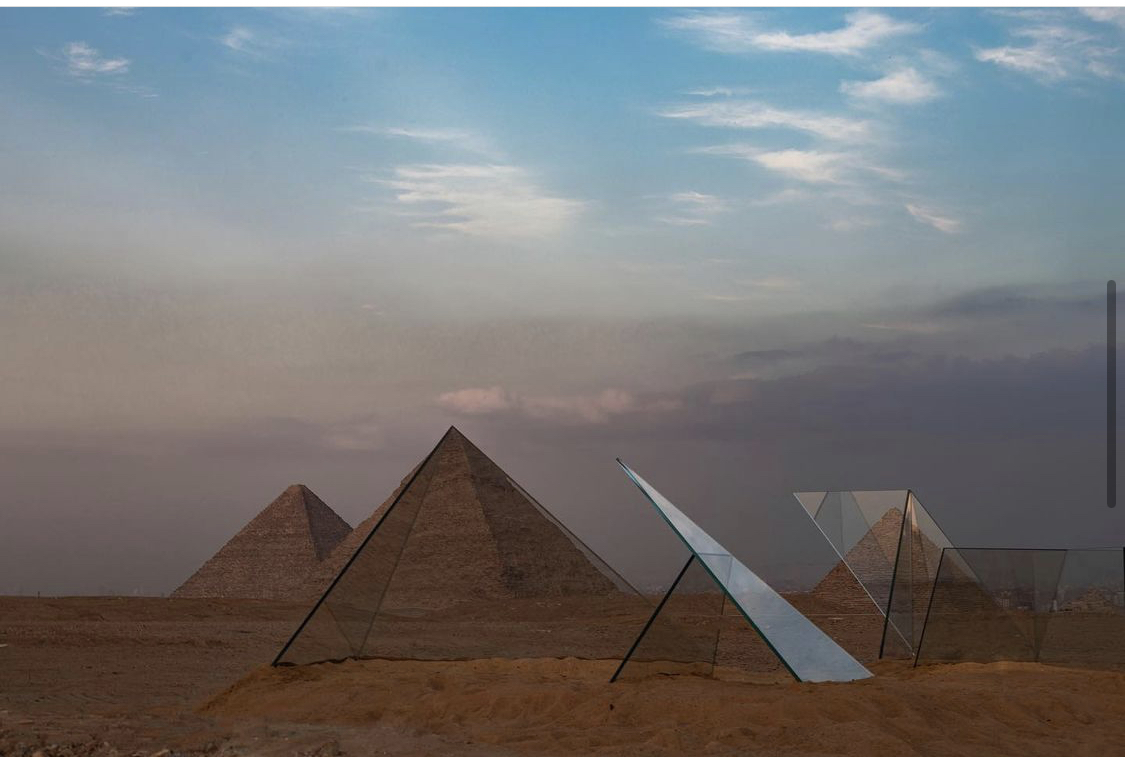 Shuster + Moseley, (Plan of the Path of Light) In the House of Hidden Places – Courtesy @shuster_moseley Instagram

With Greetings From Giza, JR can only play with his postcard image superimposed on the pyramid of Chefren, with a steel installation: after the interventions on the Louvre pyramid, the artist takes a leap into the past but at the same time a leap into the future, announcing its first release of NFT.

Interior Space: Khafre is Stephen Cox Ra‘s homage to Chefren, a work of that same Aswan granite found inside the tomb of him who wants to act as an imposing sarcophagus, whose majesty can be adapted to that of the pharaoh .

Sultan Bin Fahad‘s labyrinth of cubes, R III, pays homage to an inscription associated with the figure of Ramses III found in Saudi Arabia, investigating the question of the relationship between the two lands and the two civilizations. 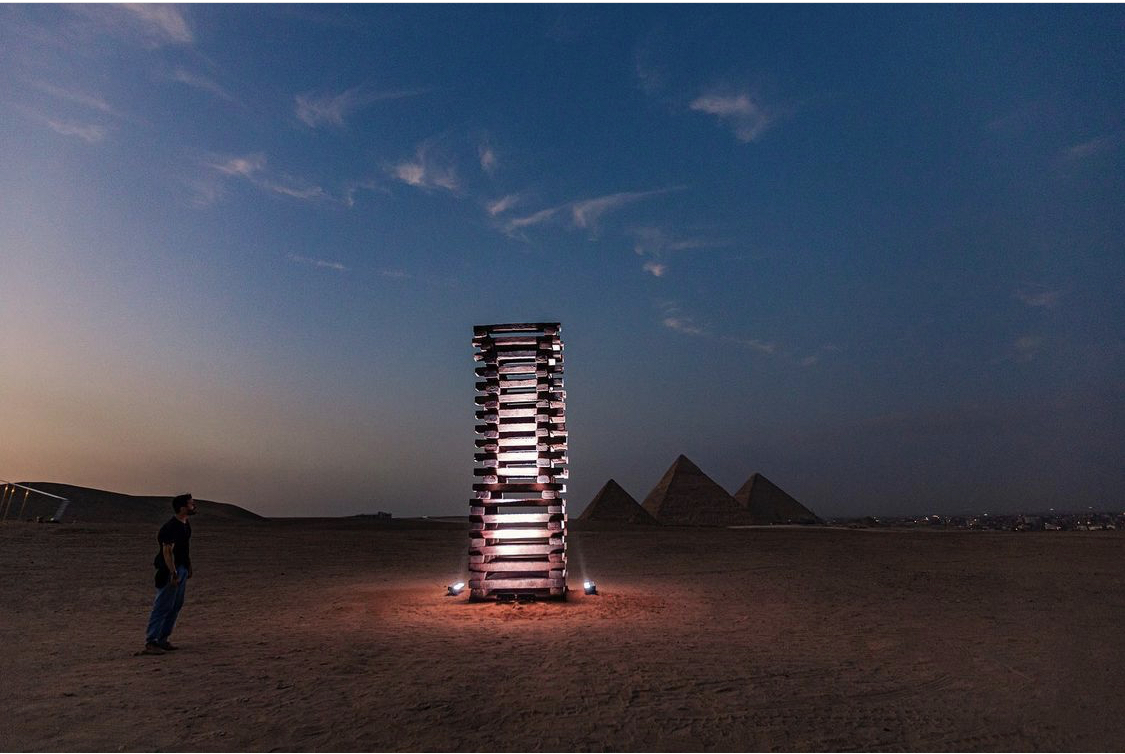 The artistic duo formed by Claudia Moseley and Edward Shuster (Shuster + Moseley) creates (Plan of the Path of Light) In the House of Hidden Places, which fits perfectly into their research made of installations that use geometry to create moments of reflection: the glass shapes create a bridge between the antiquities they relate to and the technology symbol of the future.

Alexander Ponomarev in Ouroboros takes up concepts such as that of the ouroboros, a symbol already present in Ancient Egypt, linked to the infinite flow of water, blood of the planet earth.

The Barzakh of Moataz Nasr represents that entity that divides the kingdom of the living from the beyond, as the thinker Ibn Arabi argued: there is a connection between these two worlds that is not a separation, since they are configured as two different ways of existing . 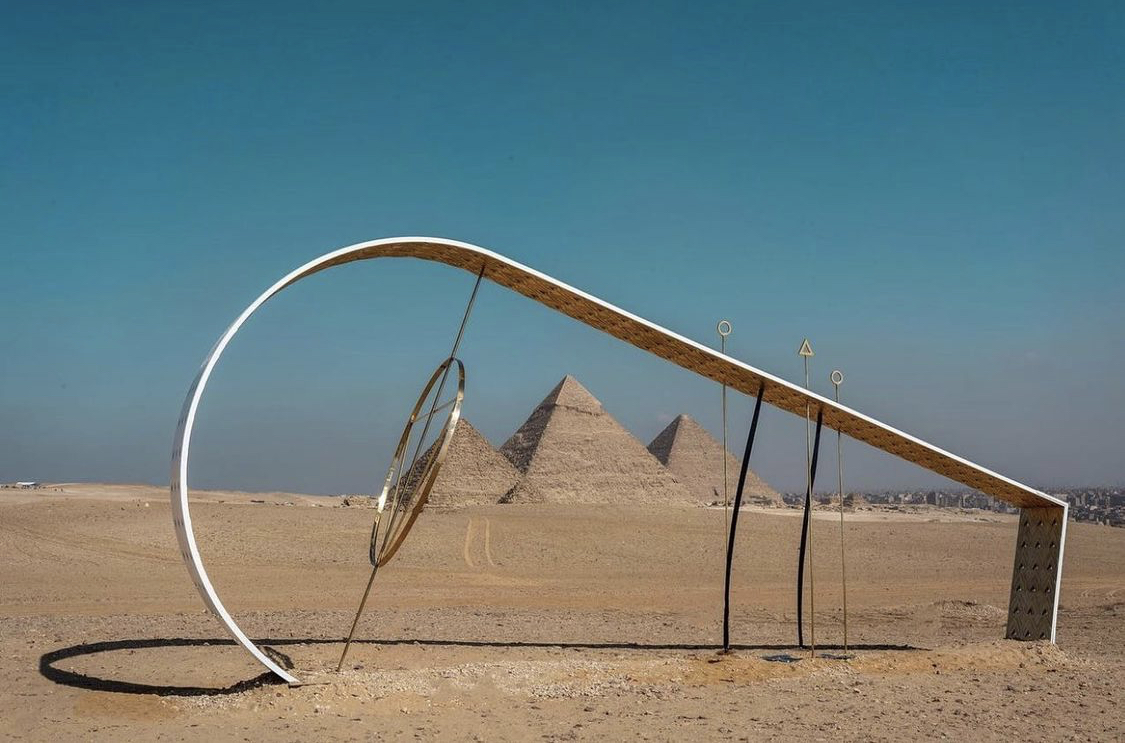 Joao Trevisan builds Body That Rises, a sort of 7-meter tower, thanks to the use of a material very dear to him, namely the wooden sleepers used in the railway tracks, which obviously wants to be a reference to the ancient obelisk that pointed towards the sky .

Sherin Guirguis dedicates Here I Have Returned to the women who played a fundamental role in the society of the time, in fact the installation recalls the shape of the musical instrument used by the priestesses of Isis, to remember the question of women who, almost invisible, over time they have carried out (and still carry out) indispensable activities.

Lorenzo Quinn closes the journey, with Together proposes his hands again, with a site specific intervention that does not want to disturb the magnificence of the works that have been present for thousands of years, but rather wants to pay homage to their constant beauty and to that role of art that knows connecting different times, worlds, people. 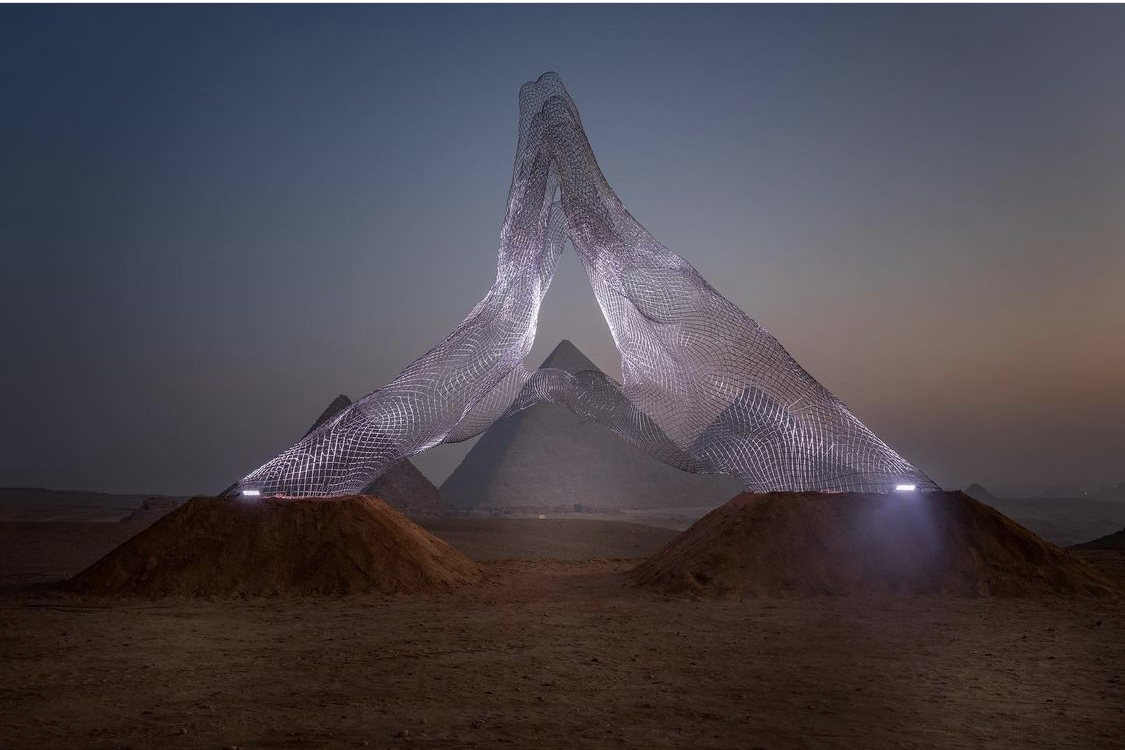 The “Forever is now” project has let the majestic past challenge the more sensitive present, in a game where the victory lay in being able to dialogue with something so impressive in physical and historical terms as to risk obscuring everything else.

Art does not die, but continues to live and to be a testimony of what has been there, as a source of inspiration for those who will come, as a bridge to unite beyond all diversity.