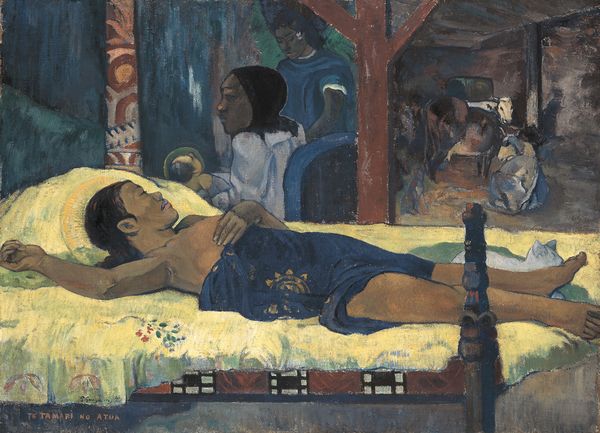 A unique push unites Gauguin’s travels, a search for places not contaminated by modern progress in which to find a primordial world lived in an almost wild and primitive way by its inhabitants.

Among his countless and subsequent wanderings, he goes from Pont-Aven in Brittany to Panama and Martinique, to then find his final destination in French Polynesia

And precisely during his second stay in Tahiti he realized, in 1986, “Te tamari no atua”, a title wrongly reported in the plural but translatable as “Birth of Christ son of God”. In fact, the subject of the artwork is a nativity, yet another religious reference within its production.

But these references do not recall a desire to transmit the Christian belief to the indigenous peoples that surrounded him, there is rather a sort of syncretism that unites references from the Polynesian cultural environment, characterized by a simple spirituality.

In this case we are faced with a representation of the Madonna with the features of a Tahitian woman, but at the same time with her head surrounded by a halo, like that of the newborn son held in the arms of a woman and almost protected by a figure who it seems winged, and they are both indigenous, in the background a stable with bovines that can still appear as a reminder of the more classic representations of the nativity scene.

The scene is suspended between the sacred and the daily, the human characters have no allegorical values ​​but rather seem to lead back to an idea of ​​divinity among men, of the sacredness that lies in simplicity. Everything seems immersed in an evanescent atmosphere, as if we were in a decontextualized space and in an interior, remote and profound time.

It seems that the inspiration for the creation of the painting was born not in reference to religion in the first place, but from a personal fact: in that year, in fact, Pahura, Gauguin’s current Tahitian girlfriend, gave birth to a son who died shortly after. And this explains the similarity of the woman holding the newborn baby with Tupapaù, a local totemic idol and spirit of the dead.

“I believe that my art, which you admire so much, is only a sprout, and I hope to be able to cultivate it there for myself in the primitive and wild state”: Gauguin had written these words to the painter Odilon Redon shortly before his first trip to Tahiti. It is evident how he managed to find a sort of his own personal earthly paradise, to get to “fix the character and light of the region” in this artwork as in many others dating back to the periods spent in those places.