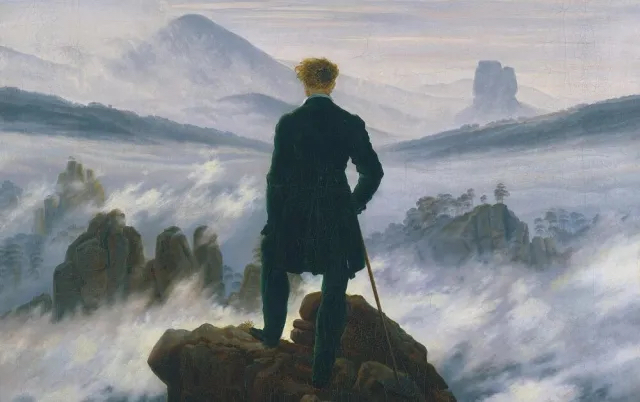 The emotionality and spirituality that surround and influence the artistic and cultural developments of the Romantic period find their maximum expression in perhaps his best-known work.

In the Wanderer above the Sea of Fog, Caspar David Friedrich portrays a mysterious man from behind, leaning on his cane, overlooking a mountain landscape between clouds and fog.

We do not know who he is, where he comes from or where he will go, what he is thinking, what emotions he is feeling, yet empirically we feel close to that sense of loneliness that surrounds him.

We cannot know he is already enchanted or more troubled by what surrounds him, what thoughts nature has made him rise within, but we perceive that urgent need to stop and reflect, which a natural phenomenon stimulates and reveals.

In the hidden face, anyone can be recognized, feeling precisely that sense of uneasiness that is perceived from within you and finding time to stop and listen to what he has to tell us.

The painting contains not only the facets of human feelings, but it becomes the expression of the force of nature which, even in the stillness of a landscape, looms and dominates man, who can do nothing against his power.

She is the engine of that drive, of that need that leads to stop and reflect and at the same time, it offers itself as a favorite place to do it.